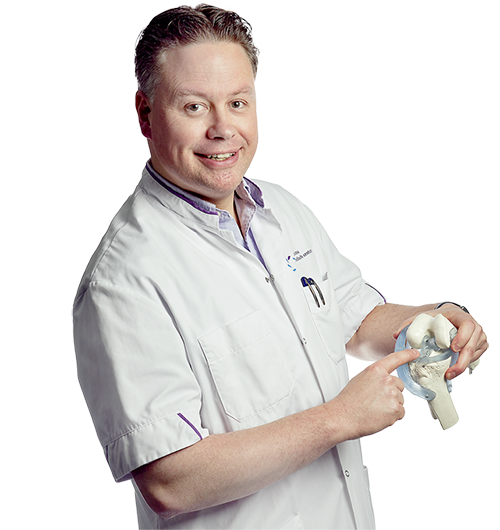 I went to a water parc to learn how to flow surf. It looked supercool, a watercourse on which surfing happens on an "ideal" wave (a thin layer of water is projected at 70 km/hour on a ramp). Things went great. It feels a lot like snowboarding which is my favourite!
Ten minutes before the end, I fell on my knee while turning. I had an immediate excruciating pain and realized something was very wrong. My lower leg was angled compared to my upperleg. I was frightened and thought: this should be straightened right away. I pulled my lower leg to straighten it without thinking. It worked but the pain made me vomit. The attendant of the flow surf company immediately said: that's broken. My knee looked strange. I noticed that I could walk on my leg but it felt unstable. The pain was bearable and I was relieved.....luckily it did not feel broken!
A colleague surgeon recommended dr Janssen, orthopaedic surgeon at Máxima Medical Center. A very friendly and professional docter who rapidly assessed the situation. My foot seemed colder and I had less sensation on the side of my foot. Dr Janssen was worried about a potential bloodvessel injury and made a scan right away. I was fortunate, the bloodvessels were intact. The physical examnination and MRI showed an acute posterior cruciate ligament injury. I thought it would be best to get surgery at once, to be able to start the rehabilitation as soon as possible, in order to continue my professional career. Of course, my tennis and snowboard sports worried me. Rob Janssen made it very clear to me that treatment with cast and brace would be better than surgery. When the cast was put on, he pulled my lower leg forward in order to relocate the knee. X-rays were taken to check the knee position at each cast treatment.
The cast was changed several times in the next few weeks. My knee felt much better. In the beginning, I felt the lower leg dropping with cast removal (a nauseating feeling). After 6 weeks, the cast was removed and the lower leg stayed in place and felt good!  The first steps were terrifying, I felt as if I would never be back to sports. My leg was very thin and difficult to control. This al disappeared soon with a brace and physiotherapy. One year after the incident, I was back snowbarding! I am so grateful that I made a film at that time to thank my orthopaedic surgeon, dr Janssen.