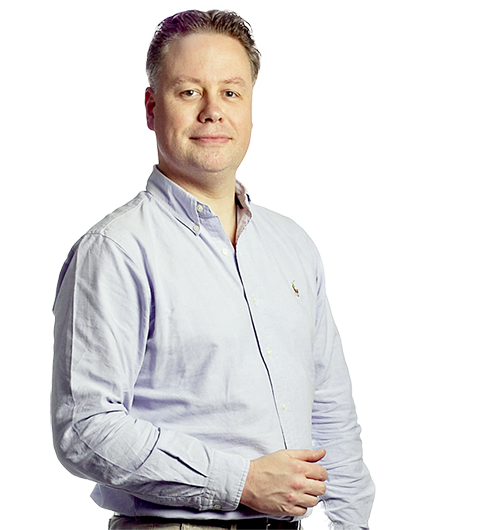 Recently, a scientific paper has...

Posterolateral instability is a serious knee injury. It is often associated with cruciate ligament lesions. Chronic posterolateral knee instability in varus legs is first treated by osteotomy. This article is published in the magazine Zorg voor Beweging  (2007).

Wind blowing in your face. Sharp irons on slippery ice.  Pushing your body to extreme limits. Mr E.S. (31) has been fond of ice skating all his life. He is an ice skating coach  with the elite skaters at IJsclub Eindhoven, the Netherlands. A serious knee injury due to a fall. He underwent surgery on July 5, 2006. “I'm glad to have had the surgery."

Initially, he was not thrilled by the idea of being operated upon. “I tend to faint at the slightest amount of blood, so dr Janssen's message was not exciting. The orthopaedic surgeon and physiotherapist have prepared me very well on the procedure and the rehabilitation. Additionally, I have trained very hard to optimize the knee's performance before the operation.”

Downhill
The ice skating coach ruptured both anterior cruciate ligament and lateral ligaments of the knee almost 5 years previously. “In a training, I ran downhill and fell. That's when the injury occurred in my knee. At that time,  I was instructed by the physiotherapist to train very hard. Unfortunately, I fell down the stairs in February 2006. Things really went wrong in my knee. I felt my knee give way several times a day. Just walking hurted my knee. The pain lasted for minutes to hours. It was clear to me that something needed to be done.”

Bone healing
I was referred to dr Janssen, knee specialist. "On wednesday July 5, 2006, dr Janssen performed an opening wedge osteotomy. He changed the position of my lower leg from slight O-shape to a slight X-shape. He made a saw cut in my lower leg, corrected it and fixed it with plate and screws. The opened bone wedge in the bone slowly heals with new bone.”

Energy
The discharge from the hospital was on the third day after the surgery. Rehabilitation takes up to one year. He walked on crutches for 2 months. “But it was allright, probably because I expected worse.” He was allowed partial weightbearing on the operated leg for the first four weeks. After that period, weightbearing was gradually increased. “My physiotherapist taught me to increase the walking distance with crutches. First 50 meters, then 100. This was slowly increased. I had a wheelchair to cover large distances in the first few weeks. To walk without the crutches for the first time felt insecure and a little strange.”

Ice skating
Ice skating is my favorite sport. “I already skated as a child in the provincial selection teams. I took part in the National Dutch Junior Championships.” His competition skating ended when he started his university studies. He decided to become a ice skate coach. He trains competition teams and actively joins them in thier training program. “This means mountain biking in the summer, jogging, skating exercises on skeelers. In wintertime, we perform conditional exercise programs and skating of course. Being actively involved in sports is very important to me. I have done this al my life.”

He is back to training since January 2007. “I can't skate at maximum power yet, the bone wedge still needs some healing. I am back on the mountain bike since January 2007 and in training three times a week. It will take one year to be fully restored for high athlete sports. I have not felt any pain in the last few months. My knee feels good. I only feel the knee in hopping activities. I think that is due to muscle strength and confidence which I need to work on."